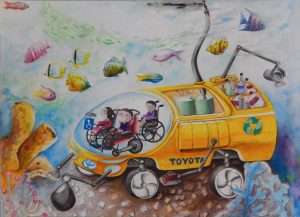 A U.S. Winner and World Winner in his age category for the 9th World Toyota Dream Car Art Contest, Michael Zhou, age 11, imagined his Handicap-Friendly Cleaning Car as an underwater vehicle that plucks plastic bottles and other debris from the ocean’s surface and floor, while allowing people with physical challenges equal access to the vehicle. Zhou’s 6-year-old brother Daniel, also a U.S. Winner in his age category, envisioned his Ultimate Toyota Medical Shuttle as a car equipped with the most advanced medical equipment and staff that travels the globe fighting ebola, AIDS, cancer, and other life-threatening illnesses.

The boys’ artistic talents and planet-helping innovation led them to Japan in August 2015 as when Michael Zhou was selected among the 30 World Winners of the 9th World Toyota Dream Car Art Contest. Last year, more than 875,000 entries were submitted to over 81 countries from around the world. From those submissions, the top 700-plus artworks were forwarded to Japan for the World Contest judging. In the U.S. contest, Michael had earned the Gold Award for youth, ages 8-11 and was ultimately selected as one of the World Winners, later also winning Best Finalist for his age category globally. Daniel earned the U.S. Silver Award for youth under 8 years old.

When asked what inspired Michael’s design, the sixth-grader at Clague Middle School said it all started with fish. “When I was younger, I read a lot of books about sea creatures and found out that every year, millions of animals are killed as a result of ocean pollution. Many humans are being affected, too. To help them, I designed this car,” he said. Michael’s car picks up and recycles trash as well as cleans up oil spills and other toxic waste. He added the handicapped component because “I think the ocean is amazing and everyone should have a chance to experience it.”

As for Daniel, a second-grader at Logan Elementary School, he became very concerned about people’s health after repeatedly hearing the word “ebola” on the radio during the 2014 outbreak in West Africa. His concept car would motor skilled medical teams to the most affected areas in the world.

Both boys credit their art teacher, Mercy Yeo of Creative Art Studio in Ann Arbor, for entering the contest.“It has been my joy to work with Michael and Daniel who are both talented in painting. In my experience, teaching art is not merely teaching technique and skill, but it also involves nurturing a creative boldness and encouraging self-confidence. Toyota Dream Car Art Contest gives them an excellent opportunity to show their creativity, imagination, and meticulous work: qualities that they will apply to every aspect of their futures,” Yeo said. Another one of Yeo’s students also was a U.S. Winner in the 9th World Toyota Dream Car Art Contest. The artwork “Egg-Cellent Hen Car” by Emily Hu, age 6, won the Bronze Award in Category 1: Youth, Under 8 Years. To learn more about Creative Art Studio, contact Mrs. Yeo via email or by phone at (734) 548-9828.